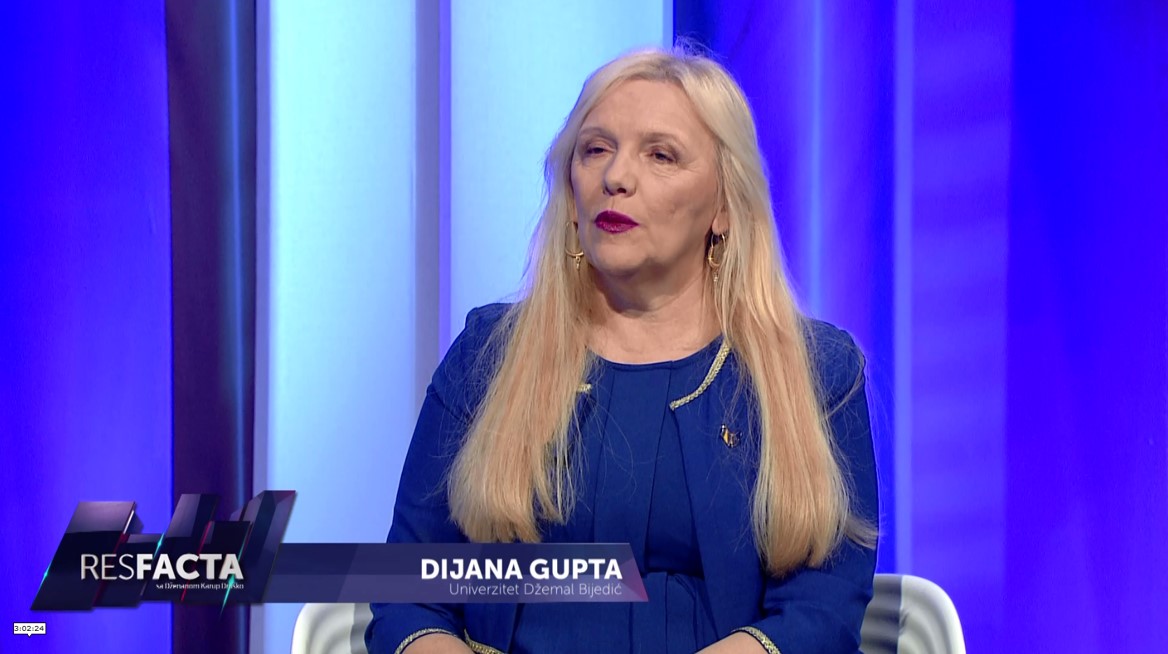 The reforms that we have to implement mean that all of us in BiH will have better lives. This is what is often not said. First, it will strengthen our institutions, education, economic situation. What will NATO bring along? When we talk about peace, peace is not just the absence of war, peace includes many things.

Peace, security and economic stability are, according to all studies, the main reasons why citizens of BH are leaving the country. Prof. Dr. Dijana Gupta from University in Mostar, President of the Atlantic Council in BiH, when speaking as a guest in the program Res Facta with Dženana Karup Druško on the topic of NATO and Bosnia and Herzegovina, talked about this in the context of the Reform Program that was recently adopted by the Presidency of BiH. She said:

- The reforms that we have to implement mean that all of us in BiH will have better lives. This is what is often not said. First, it will strengthen our institutions, education, economic situation. What will NATO bring along? When we talk about peace, peace is not just the absence of war, peace includes many things. Can people in BiH, now that they have this peace, or absence of war, live off heir work? Are their human rights protected? Will their children have free education? Where will they work? Where will they live? The reforms will bring a lot of positive things to BiH.

After the Dayton Agreement, this document, which we have now sent to NATO, is an important turn in right direction, and I thank the Presidency of BiH for recognizing the most important strategic objective of BiH; because by signing the Dayton Peace Agreement, BiH undertook to become member of great alliances, like NATO and the European Union, and this is our paramount foreign policy objective. With arrival of NATO, we will get everything in a package, because NATO does not recognize partial things in a country.

When asked about specifics of what the Reform Program brings along, Prof. Dr. Nedžad Korajlić, Dean of the Faculty of Criminalistics, Criminology and Security Studies of the University in Sarajevo, said decidedly:

- It will bring along peace and stability, and feeling of security. Usually, when we say the feeling of security and security status, we think of thefts, break-ins, etc. These are significantly more complex forms. We feel insecure because of the non-functioning of the legal system, non-implementation of decisions of Constitutional Courts, blocking of the state institutions. We often hear about the entity of the Republika Srpska and the entity of the Federation, while forgetting the Brcko District. Then we have the situation in justice, we have new forms of crime. Genocide denial. These are all things that must be put in order and respected.

Now we are witnessing the initiative to pass a law on Constitutional Court of BiH. Why think about it at all when we have the Constitutional Court that is provided for in the Constitution of BiH? This is a theory that is formulated very poorly, we cannot resolve constitutional categories by a law. This too contributes to the feeling of insecurity. Reforms, those related to NATO as well as other reforms, will bring along stabilization of this region, so that we will not worry whether there would be another war, within the country or from the outside. Unfortunately, we have had the aggression against BiH. People keep failing to understand that NATO will resolve that, and provide security not only to Bosniaks, but also to Serbs, and Croats, and all citizens of BiH.